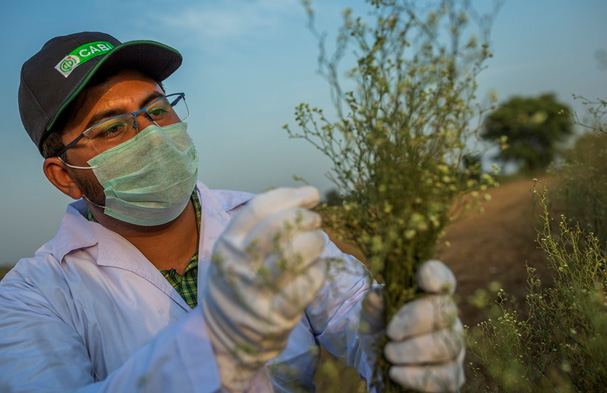 CABI scientists, as part of an international team of researchers, have discovered a new biological control in the fight against the highly noxious and invasive weed parthenium (Parthenium hysterophorus) in Pakistan.

As outlined in a new paper published in the journal BioInvasions Records, the scientists report the first record of the rust species Puccinia abrupta var. partheniicola  more commonly known as winter rust  in the Punjab and Khyber Pakhtunkhwa Provinces.

The presence of winter rust marks the second natural enemy, in addition to the leaf-feeding beetle Zygogramma bicolorata Pallister (Coleoptera: Chrysomelidae), which could help the management of parthenium in Pakistan.

According to the CABI Evidence Note Parthenium: Impacts and coping strategies in Central West Asia, parthenium is an aggressively-spreading weed, now classed as a superior weed, which is extremely prolific and capable of producing up to 30,000 seeds per plant.

CABI scientists say parthenium can cause severe allergic reactions in humans and livestock, may harbour malaria-carrying mosquitoes, displace native plant species and reduce pasture carrying capacities by as much as 80% to 90% where in India, for example, the cost of restoring grazing land is around USD 6.7 billion per annum.

The evidence note also highlights that parthenium weed can have a significant impact on crop yields  through direct competition as well as by inhibiting germination of seeds  where, for instance, in Ethiopia sorghum grain yield was reduced from 40 to 97 percent. 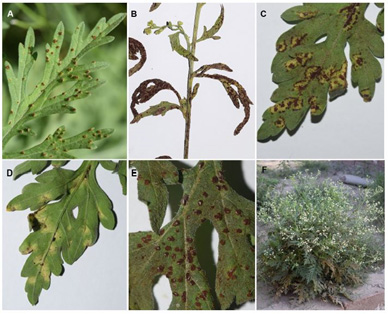 The researchers conducted surveys for winter rust covering 65 sites in 19 districts of Punjab and Khyber Pakhtunkhwa. The species was recorded at 21 sites in 8 districts. The most severe attack was found in the northern part of Punjab including Lahore, Attock and Narowal districts, while in Khyber Pakhtunkhwa medium rust infection was recorded only in Manshera district. In other districts rust infection was considered low or absent. 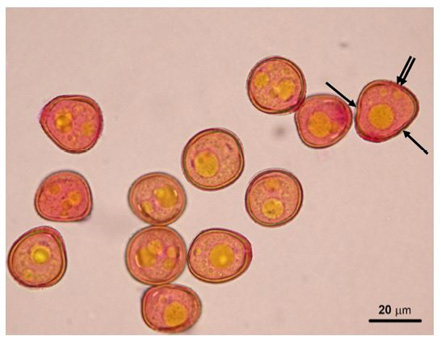 Dr Philip Weyl, a co-author on the paper and Research Scientist, Weed Biological Control at CABI, said, Parthenium weed is considered to be a dominant weed species of natural ecosystems and agriculture in Pakistan and is also highly allergic to humans and toxic to livestock.

Management options in Pakistan are limited and have tended to focus on manual removal and the application of herbicides. However, manual removal of the weed without protective clothing is very risky due to contact dermatitis while large-scale control using herbicides is economically and environmentally unsustainable.

The scientists reveal that while winter rust has previously been introduced deliberately to tackle parthenium in Australia in 1991 it has also appeared unintentionally in China, India, Ethiopia, Kenya, Mauritius, Nepal, South Africa and Tanzania. They believe the rust could have entered Pakistan via India or Nepal.

Lead author Iram M. Iqbal, from the University of the Punjab, said, While the winter rust may not kill the parthenium it can significantly reduce biomass and seed production, especially when applied at the rosette stage of the weed.

Furthermore, the suppressive effect of the rust was enhanced in the presence of competitive pasture plants and is likely to maintain its effectiveness under elevated CO2 concentrations. We believe that the presence of winter rust in Pakistan will aid the management of parthenium weed.

The paper is available as an open access publication in BioInvasions Records, a journal of the International Association for Open Knowledge on Invasive Alien Species (INVASIVESNET), and can be found here: https://doi.org/10.3391/bir.2020.9.1.01

For more information about INVASIVESNET, please visit their website (https://www.invasivesnet.org ) or contact their Media and Communications Officer at media@invasivesnet.org.