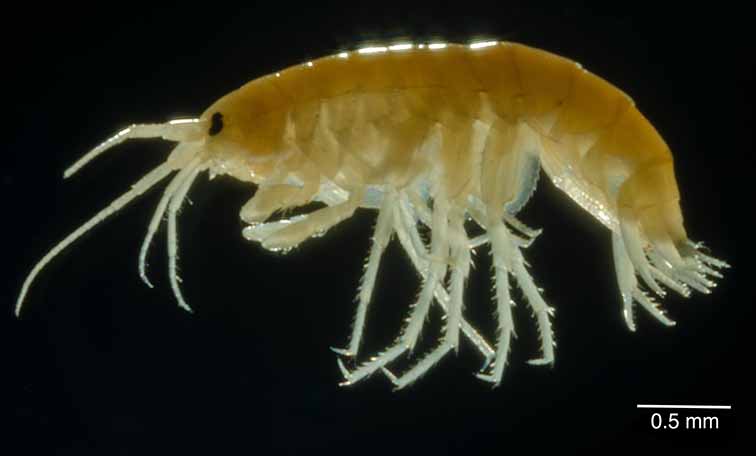 Joint press release with the University of Derby

Researchers at the University of Derby have provided the first evidence that a highly invasive species of freshwater crustacean from North America has reached locations in the UK  including Lake Windermere, which forms part of the protected Lake District National Park area, and Smestow Brook in Wolverhampton.

Crangonyx floridanus is a small species of gammarid (pictured). It has invaded and spread rapidly throughout Japan, where it has replaced or drastically reduced native populations of gammarid species, having a significant impact on local ecosystems.

Using genetic and microscopic evidence from samples taken at the two locations, the team from the Universitys Aquatic Research Facility worked with Surescreen Scientifics, the Freshwater Biological Association and the Natural History Museum to identify 14 C. floridanus individuals.

The current distribution of C. floridanus in the UK is unknown, but both sites where it has been found are well-connected to other river and canal systems, leading to a high chance that the species has spread further.

Post-Graduate Research student Quentin Mauvisseau, who conducted the study along with Dr Michael Sweet, said: Genetic analyses of C. floridanus indicate that British inland waters have been colonised by the same lineage which invaded Japan. These two geographically distinct sightings in the UK, more than 200km apart, suggest that the species has already spread over a substantial area.

C. floridanus has a high invasion potential and since 1989 has colonised large regions of the main island of Japan. Its rapid dispersal and high population growth highlights the urgent need to contain the spread of C. floridanus and protect local species.

John Davy-Bowker from the Freshwater Biological Association, added: More work is urgently needed to understand the distribution of Crangonyx floridanus in the UK and to assess its potential impact on our native freshwater species.

The UK has already been invaded by at least one Crangonyx species, C. pseudogracilis, which is closely related to C. floridanus, making it difficult to correctly identify. Also originating from North America, C. pseudogracilis was first documented in England in 1936 and has rapidly extended its range to colonise various habitats including ponds, lakes, rivers and canal systems.

The findings of this study have been published in BioInvasions Records, an open access journal of the International Association for Open Knowledge on Invasive Alien Species (INVASIVESNET), and can be found here.

For further information contact the Corporate Communications team of the University of Derby at pressoffice@derby.ac.uk (or call 01332 591978), or contact INVASIVESNET Media and Communications Officer at media@invasivesnet.org